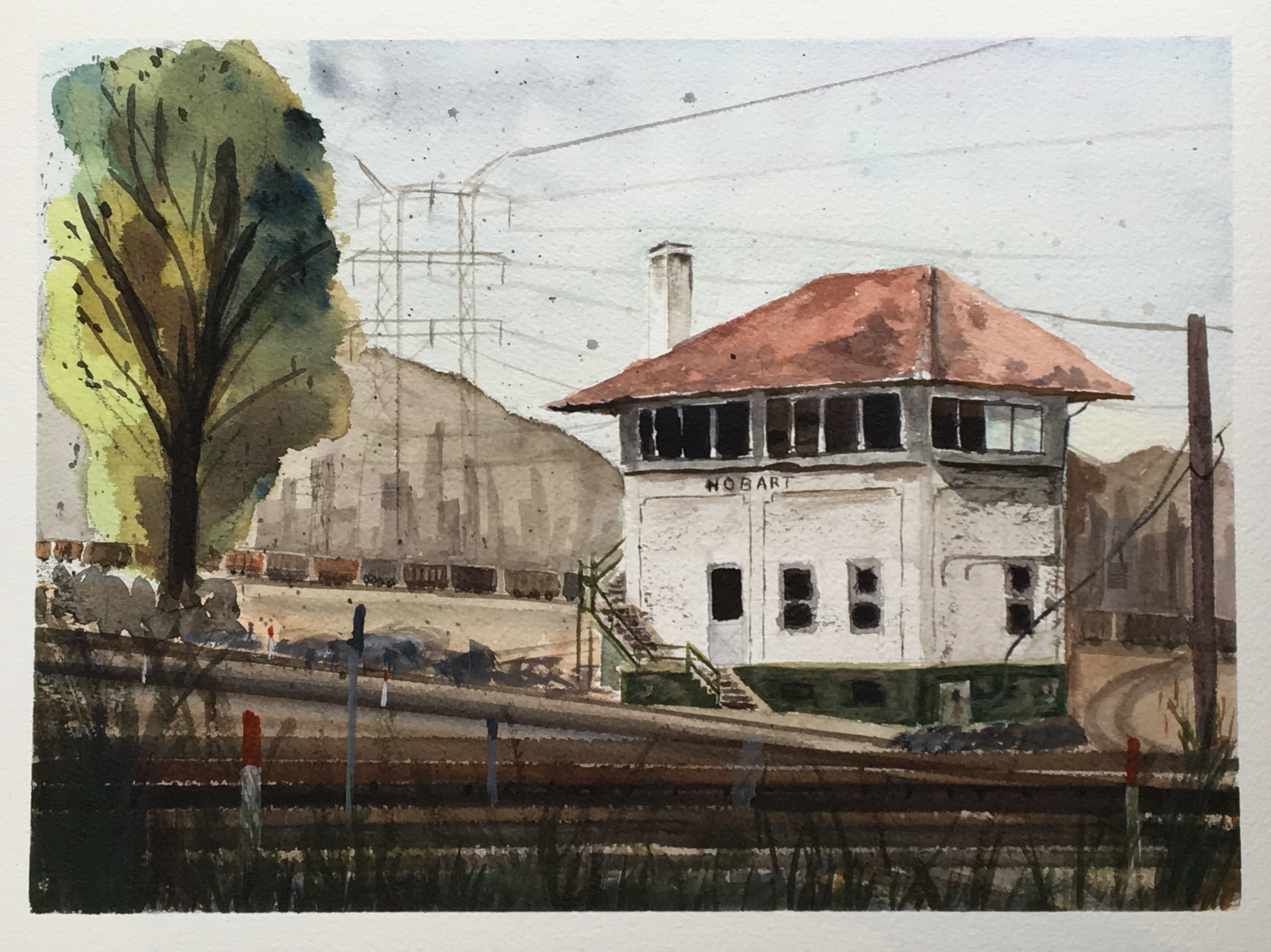 Finding a subject by geolocating

Last month, I was shooting on location, and on the drive back from the hotel, the freeway backed up and Waze took me off the interstate and put me on some backroads. I got fascinated with the industrial landscape I was driving though, and as I passed a giant bunch of railroad tracks, I saw this cute little building. “Wouldn’t that be fun to paint!” I thought. I got to the end of the block and realized, “You should go back and take a picture of it.” So I turned my car around.

Ever since then, I have not been able to stop thinking about that interesting

little abandoned building and the feeling it evoked for me. I loved the way it was sitting there by itself, surrounded by no other building, both a companion to and separated from a solitary tree nearby.

I really wanted to paint it, but I just hate painting from photographs, so I really didn’t want to do that.

The night I passed it driving home, I was tired, I was driving after a full shooting day, I was blindly following my navigation app, and I really had no idea where I was when I saw it. But I always let my phone track everything I do, so yesterday morning, I decided to try to geolocate that little building and go back and paint it.

First I went into my camera roll to see what location got geotagged in the metadata. I scrolled back until I found the pictures, and sure enough, it told me “Vernon – August 13 – 18:43.”

Next I went into my “Moves” app, which runs in the background 24/7, recording where I go – driving, walking, bicycling, and more – and where I stop. In this Moves app, you can go back to any date and see where you went. So I pulled up August 13th and had a look.

The “storyline” showed what my day consisted of. (You can click on it for a bigger image if you really want to see just how my day went!)

I had seen that building on my drive home, so I clicked on the second “transport” line and got this:

From here I zoomed in to find Vernon.

Going closer I could even see the place where I doubled back.

From there, it was just a matter of plugging the intersection into Waze and finding out it was about a half hour drive away. I detail all this out, because I think it’s a funny way to get back to a location, but so obvious, once you think about it, and so helpful.

And now on to the painting!

I’ve been trying to make my plein air kit smaller and smaller, and everything I took with me fit into this relatively small knapsack (including the tripod and easel support!)

Here’s everything set up (I have a separate post about my current easel coming soon this week, stay tuned):

And here’s me starting out my drawing:

A train came by and while it was passing, I was able to keep looking at the building between the cars, but then it parked and just sat there!

Luckily, it was only for a few minutes, and then it backed out again.

The first color I laid down for my mountains was really a wrong note, but I decided not to panic about it and just come back to it later, and sure enough, I was able to glaze over it and make a better choice.

The actual background I was looking at in the far distance was way too complicated for me to paint – so many electrical thingamajigs and whirlydoodads – so I just pretended there was a train going by behind the building and made one up. I also had no idea how to depict the railroad tracks. I laid down some brush strokes that matched the colors of the tracks themselves, but I had no idea what to do after that.

It was still looking pretty barren, so I made up a distant city way in the back, but the foreground with the train tracks was still just ridiculous. So I put in some of the white and orange posts that were there, but then I thought, “Why didn’t you think about where you were putting them? Now they’re like two goalposts at the sides of the composition!”

I didn’t want to try to scuff them out or anything, though. When I’m painting, it’s kind of like I’m writing in my journal, I’m almost more interested in capturing what I actually did during the painting than getting a particular result at the end. I know I could probably have corrected out the second poorly-placed post, but, you know, that’s what I wrote, so I wanted to remember that I wrote that. That might be why I always paint in one go and never have any inclination to go back and fix anything once I’ve stopped painting any particular thing. Then it would no longer represent my experience of the moment, which is why I paint, I think.

So I just disguised both the railroad tracks and the goal posts with a bunch of grass that wasn’t there. It’s okay. I’m sure I’ll get better at such subjects and not have to do that next time.

I’m pretty pleased with the final result and I’ve kind of fallen in love with this subject.

I did some research and found out that this is “Hobart Tower,” and it’s one of many “interlocking towers” where people would sit and help make sure trains didn’t run into each other at train intersections (this intersection is called San Pedro Junction). I haven’t been able to find out if interlocking towers are still in use, but I did find this online diary of L.E. Crowner, who manned Hobart Tower from 1991 to 1999, in which he (or she?) details some challenges of running the tower, including being in the tower during the Northridge earthquake!

I hope you fell in love with this little building, too, and if you have any information to share about Hobart Tower, interlocking stations, or train junctions, please leave a comment!

One Reply to “Hobart Tower: Plein Air in Vernon, California”